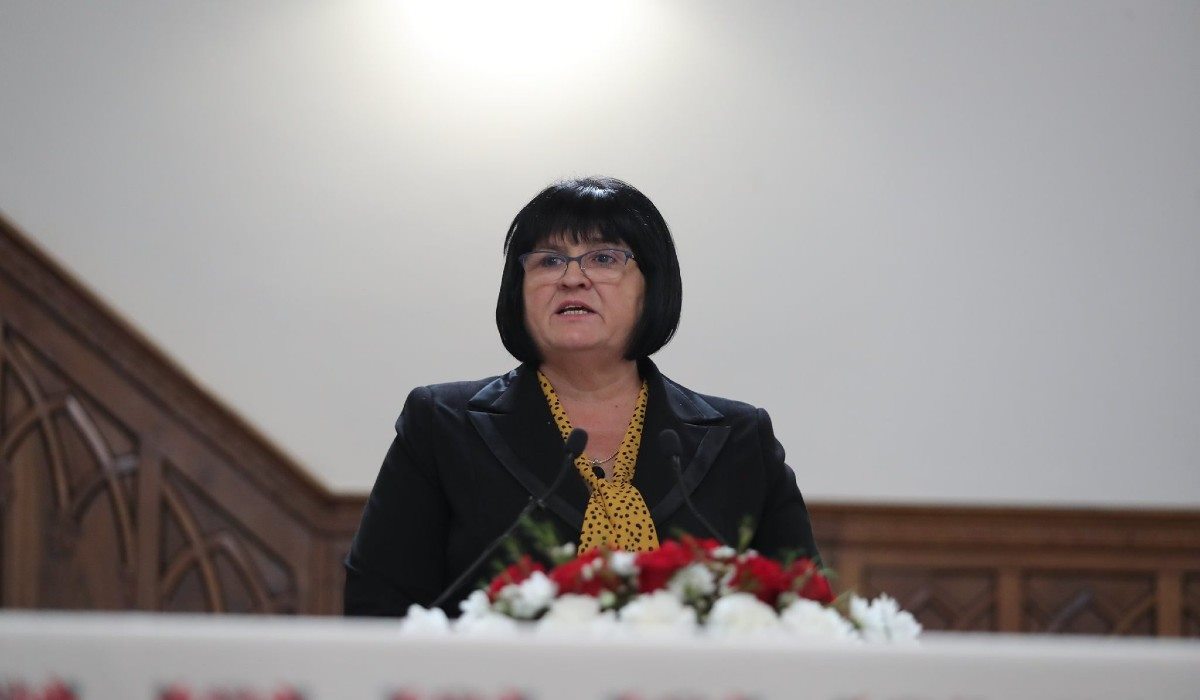 On behalf of the thousands of members of the THPA (Transcarpathian Hungarian Pedagogical Association, and on behalf of the more than 20,000 students studying in educational institutions with Hungarian language of instruction, and their parents, I would like to thank for this great honour, the Rákóczi Prize. Our organization works to ensure that our children receive quality education in their native language from kindergarten to university, in their native Transcarpathia.

We set the same goal for which the Ukrainian nation has struggled for centuries: to learn and speak in our native language in all areas of life in our homeland.

In the first decade of Ukrainian independence, we found partners in the Ukrainian intelligentsia who understood our aspirations because they grew up as a minority in the Soviet system and knew how difficult it was to learn and prosper in a non-native language. In the mid-1980s, we fought together with the Ukrainian teacher colleagues against violent Russification and the forced Russian-language classes. We had the same aspirations and opinion that the foundations of knowledge can be laid and consolidated in the native language, to which several languages can be attached if taught as second/foreign languages, and if the requirements are realistic, the methods are good, there are tools and will, positive attitude and acceptance from the majority. I am very sorry that in the last decade, all this is no longer understood by the young Ukrainian intellectuals who have grown up in the meantime, but I hope that today’s meeting also helped them get one step closer to us, better understand the Hungarian national community in Ukraine, their requests.

I am glad that the ministers accepted our invitation, and I am very sorry that Mr Dmitro Kuleba did not choose us, but chose another program instead, so I ask those who will have the opportunity to meet him in person to tell him what has been said here, to forward the requests of the Hungarians living here.

What do the Hungarians of Transcarpathia want?

Neither more nor less than any national community living in a free, democratic country in its homeland: to use their native language in all areas of life, the possibility of education in the native language from kindergarten to university, which wasn’t banned even by the communist regime, which is commonly and deservedly hated both by us and the Ukrainian nation. We are asking for this opportunity to be returned, because we are not migrants or aggressors here on this land, but indigenous people, and this should be acknowledged so that it is a win-win solution of the artificially ignited tension that now affects our countries’ good neighbourly relations. We hope there will be political will and strength for a solution on both sides.

The army of young people sitting here is proof that they learned Ukrainian in addition to the education in their native language. They are: more than 300 young people enrolled this year, 200 of whom are full-time students present here at the opening of the academic year. They all passed the advanced level of Ukrainian exams on the basis of tests designed for those whose native language is Ukrainian, who graduated from Ukrainian schools and entered a Ukrainian philology department, because this test was compulsory for everyone entering a higher educational institution, including Hungarians. So they learned to reach the level that the Ukrainian state expected of them. The MSc students, who can now wear the institute’s gown because they obtained a BSc degree, had already learned a third language, English. I hope they do not stop before reaching five, because the more languages we speak in Europe, the more we will know and achieve.

One does not have to go far to find the key to the solution, just to visit the neighbours. I would have asked the Minister, but in this case I am asking his delegation to ask the compatriots in Kiev to prepare the law on the rights and use of languages of minorities, as promised when introducing the law on the state language. In connection with the preparation, let them send experts to study the internationally acknowledged examples; they should first go to the neighbouring Hungary, where an exemplary minority law has been adopted, which actually works.

We, the Hungarians of Transcarpathia are only asking for the rights in Ukraine that are given to the Ukrainian minority living in Hungary: to declare us a native people, to allow us form a minority local government, to have the right and opportunity to run our own affairs, institutions and all this in the maintenance of the state, because we are also tax-paying citizens of this country. Our community should be able to delegate an MP directly to the Ukrainian Parliament.

I would ask Minister Szijjártó to share with Minister Kuleba his experience of the process of this legislation and the good practice that has been implemented.

Please ask Minister Kuleba to have the competent authorities study the model Hungarian minority law and to create a Ukrainian one on its basis, which, if possible, might be even better.
I wish to ourselves and you that all this be done with the help of God, and we, Hungarians of Transcarpathia, as always during the last hundred years, will continue to be law-abiding citizens of the country in which we live.

We ask for God’s help so that Ukraine can join the European Union as soon as possible, because there is no other way ahead of us, it is in our common interest – for us and for Europe. Keep in mind, however, that the road to Europe passes through Transcarpathia. One can travel by plane to negotiate, but this region borders four European countries, in which many peoples and cultures thrive. Please take care of this flower garden and do not allow a single flower to dry out.