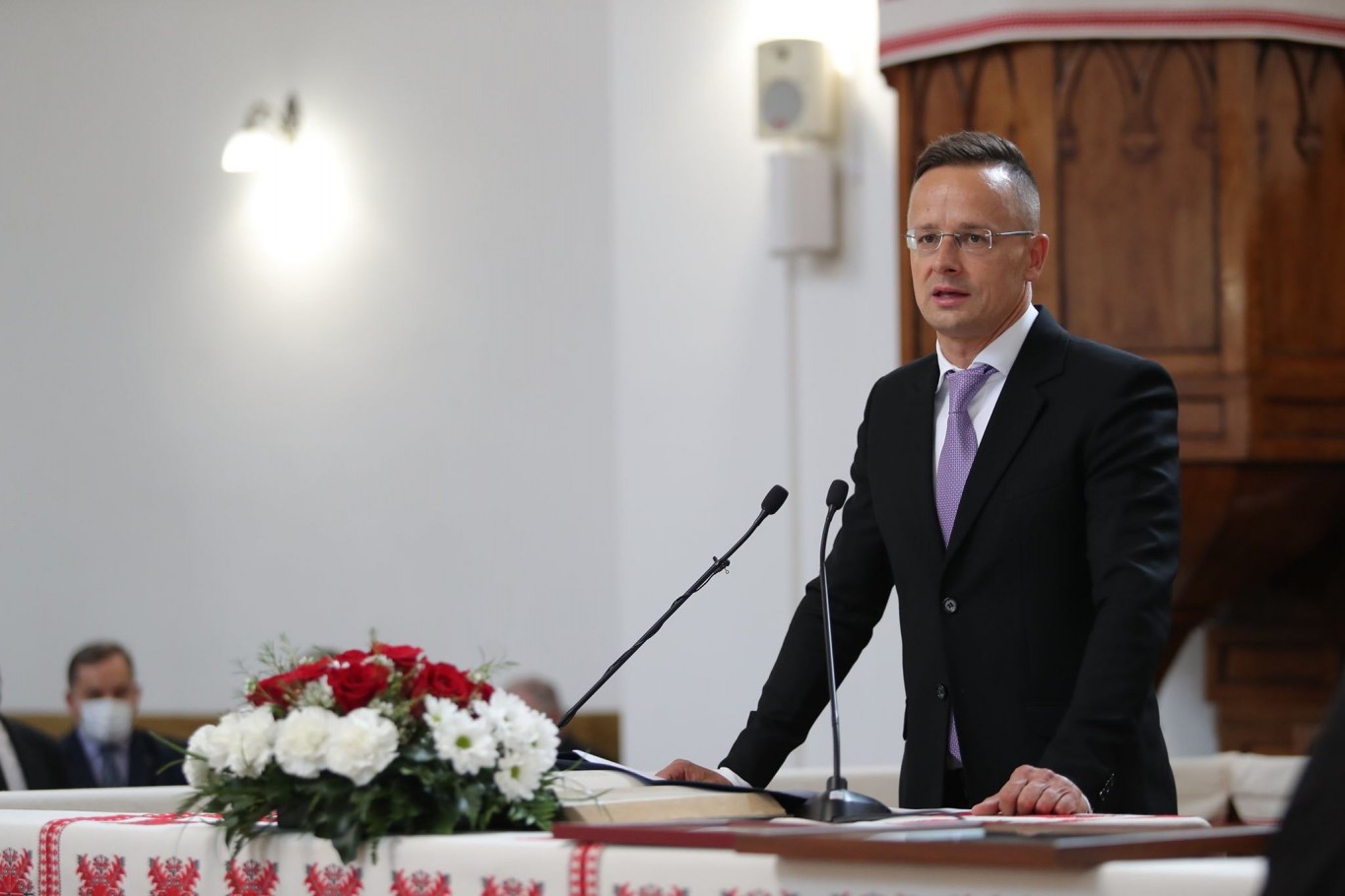 First of all, allow me to thank you for this award. I have to say, it is well above my merits. In addition to acknowledging the past achievements, I consider it as an encouragement for the future, and even as an expectation on your part, which I will try to meet in the future.

There is an image about politicians that implies that they are cold-hearted, insensitive beings, they have no feelings, or just hide them very deeply, or cover them very well. The latter may be true, but I must say that I personally appreciate the recognition you have given me. Praise is also good, of course. At the same time, it is obvious that for a politician, an elected official, the trust of the citizens is always the greatest honour, which we have the chance to gain at least every four years. So now I am considering this award granted to me, as a mid-term recognition.

Furthermore, this recognition feels incredibly good because I received it from a national community living beyond the borders of Hungary, who had to face perhaps some of the greatest challenges ever. Namely, the task of survival, of organizing their everyday life as Hungarians. The national policy principle of the Hungarian government is that all Hungarians are responsible for all Hungarians. That is why it is not only my task/our task, but also my duty/our duty to stand up for you, to stand up and fight for the Hungarian community of Transcarpathia. Therefore, for me, this recognition is nothing more than a symbolic recognition of our common and hard stand for survival, the recognition of the joint efforts of the Hungarians living in Transcarpathia and the motherland. We have to acknowledge that we cannot be successful and strong without each other, because the Hungarian community in Transcarpathia cannot be strong and successful without a strong and successful motherland, and this is also true in the other direction, the community of Hungarians cannot be complete without the Hungarians of Transcarpathia. So our job is to work together, to make efforts together to be successful both within and beyond our borders.

The last century has been difficult for the Hungarian nation. Looking back on this hundred years, I think without any exaggeration and pathos, we might say that perhaps there isn’t any other nation in the world that would have endured such a century. The Hungarian nation not only endured, not only survived this hundred years, but also became stronger. Today, Hungary is no longer a melancholic country surrounded by enemies, not a lonely country, but a home of a nation full of self-confidence. Today, we Hungarians are part, and even engines of the cooperation in the Carpathian Basin, in Central Europe that will be the source of European development in the next period. After all, it is not an exaggeration, but a fact-based statement that the future of the European Union is being written here, in Central Europe.

Over the last ten years, we have embarked on building a spiritual and economic cooperation whose actors, together with mutually beneficial initiatives, help each other on a common path to success. Just think about it, eleven years ago, the President of the Hungarian Republic, who wanted to visit Slovakia, was arrested in the middle of the Komárom Bridge and was not allowed into the country. Eleven years later, the Hungarian and Slovak prime ministers handed over the Danube bridge connecting Komárom with Révkomárom together. Or let’s just look at the recent past of the Hungarian-Serbian relations. Hostility, disputes in the past, and now a strategic alliance, friendship, mutual support characterize the relationship between the two countries. If you ask the Serbs which nation, which nations are considered to be their number one or main allies in Europe, then Hungary will surely be among the answers. Well, the improvement of such relations can be the basis for the successful future of the nations of the Carpathian Basin and Central Europe with the construction of roads and railways, the opening of border crossings, energy connections and economic development programs. This is the future in which everyone will find their own benefit, in which our national affiliation will not ruin our relations, in which the Slovak, Austrian, Slovenian, Croatian, Romanian, Serbian and Ukrainian people will do just as well as the Hungarians who live in those countries.

The fact is, my dear friends, that in our case the border of the country and the border of the nation do not coincide, but it is up to us what we make of this situation. Over the last 10 years, we have proved to our neighbours that if it is good for the parts of our nation that live with them, it is good for them as well. This is the vision for which we are fighting, in which all Central European nations and countries in the Carpathian Basin have a place. To achieve this, the neighbouring countries must see the Hungarians living there not as a source of conflict, but as a resource, a link between the two countries. Borders do not separate us from our neighbours, they connect us with them.

Dear friends! Ukraine will also be included in this successful Central European, Carpathian Basin future. That is why we are trying to do everything step by step in order to steer the Hungarian-Ukrainian relations in the right direction. Ukraine could count on Hungary’s support in every difficult moment. Whether it is the recognition of the territorial integrity or sovereignty of the Ukrainian state, the advocacy for it, the transport of energy, the provision of health assistance, or even the enabling of the Ukrainians to return home from Western Europe. Today, when the world is facing unexpected challenges, we are still offering a helping hand, and today we have handed over 50 ventilators to 22 hospitals of Transcarpathia.

Dear ladies and gentlemen! Dear friends! We think that the Hungarians living in Transcarpathia will also be included in this successful Central European future; the Hungarian community that can count on the support of the motherland in everything in the future. This includes the Rákóczi Institute, which is one of the most important bastions for the survival of the Hungarians. After all, it is from this institution that the educated young people starting their careers will graduate; the ones who will teach and lead the next generation. Therefore, the Hungarian government will continue to support the work of the institution by all possible means. Of course, you will have to tell exactly what support you need in the future. And, of course, we will continue the renovations, constructions and support of the entire Transcarpathian institutional system, just as we will hand over the Perényi Cultural Mansion today, partly for your use.

Dear friends! Dear students of the Institute! Of course, this promising vision of success also includes those young Hungarians who are now starting the academic year within the walls of this school. Without you, it would be impossible for the Transcarpathian Hungarians to survive. You represent the future, you will teach our wonderful native language to the next Hungarian generation, and along with their families you will be the main link between the children and their Hungarian identity. I must also say that there are very few professions that would involve more responsibility. That is why I wish from the bottom of my heart that you complete this challenge. In the upcoming period, you should acquire knowledge that will enable you to contribute to the survival of the Transcarpathian national community and to the future success of the entire Hungarian nation.

Once again, allow me to express my gratitude and appreciation for this recognition, which I have been able to receive today, and I wish you to pass on as much knowledge as possible to the young Hungarians studying here during your personal educational work in the coming months. Dear Presidents, gentlemen! Madam President, Thank you again for the recognition. I wish you good work, perseverance and steadiness. Thank you for your kind attention!