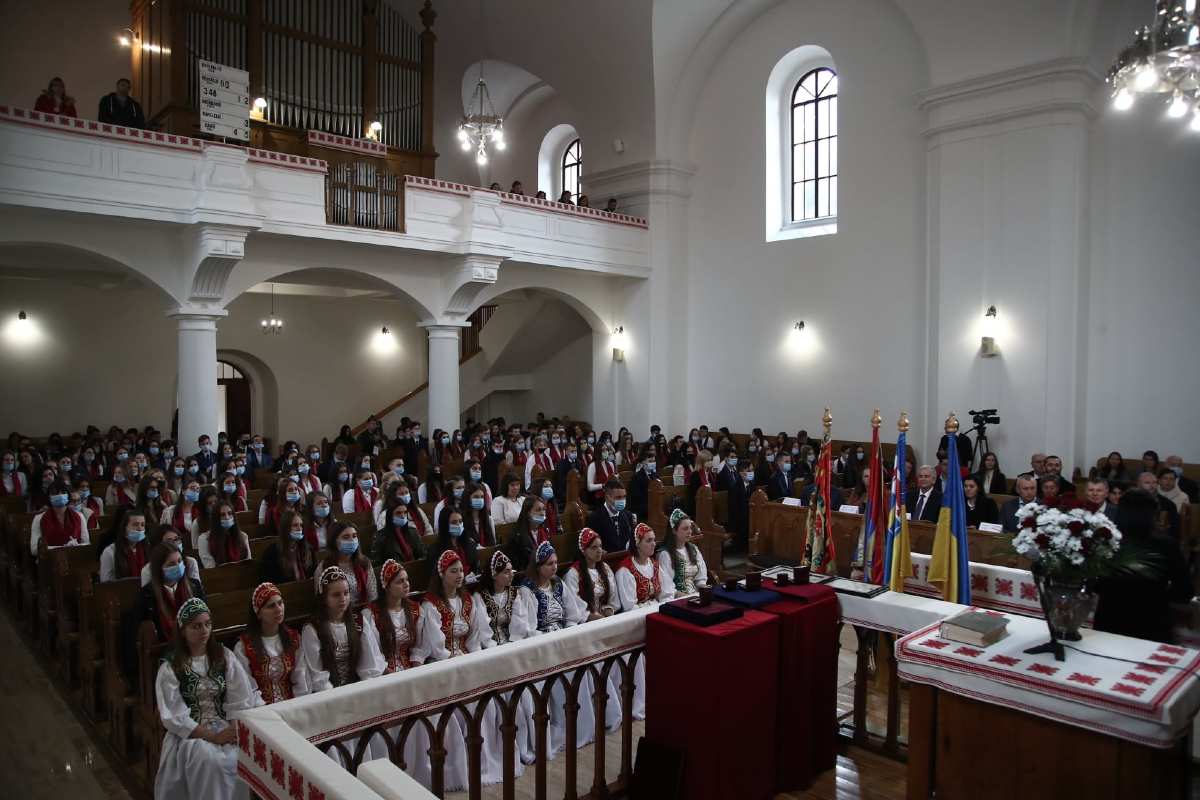 On September 24, the new academic year began for 987 students of the Ferenc Rakoczi II Transcarpathian Hungarian College of Higher Education. The opening ceremony was traditionally hosted by the Reformed Church in Berehove.

The event began with the display of historical flags of Transcarpathia, which were brought into the church by the students of the institute dressed in Kuruc-era costumes. Afterwards, János Margitics, the pastor of the Berehove Reformed Church, greeted the participants.

After the national prayer and the anthem of the institute (the sad song of Ferenc Rákóczi), the invited guests, including Tibor Misovicz, secretary of the Maecenas Universitatis Corvini Foundation, were greeted.

In his speech, István Csernicskó, Rector of the Rákóczi Institute reported on the successes and developments achieved in the last academic year. He highlighted the significant increase in the number of students and the number of lecturers with doctoral degrees and associate professorships. After that, the rector greeted the first-year students, wishing them strength, perseverance and diligence to complete the tasks before them.

The rector’s greeting was followed by the pledge of the first-year students, then they were officially inaugurated by handshake as students of the institution, and then the Student Anthem was played.

The Rákóczi Prize, established by the scientific council of the institute, was presented at the opening ceremony of the academic year. The award is given to those who, through their moral standing and financial support, have made a significant contribution to the training of thousands of young Hungarians in Transcarpathia, thus helping them to prosper in their homeland. The prize can be awarded to two people each year – one from Hungary or abroad and one from Transcarpathia. According to the decision of the Council, in 2021 the winner from Hungary was Tibor Misovicz, and the winner from Transcarpathia was György Herczog, the leading methodologist of the Cultural Centre of Transcarpathian National Minorities.

After the award ceremony, Tibor Misovicz greeted those present. In his speech, he highlighted that the institute has been in good hands for the past 25 years and wants the years to come to be fruitful as well.

In 2019, the institute awarded the Tomcsány Loyalty Award for the first time. It is given to full-time lecturers and researchers of the institution who have been working at the institute for at least two decades. In 2021, the award was given to József Molnár, Head of the Department of Earth Sciences and Tourism.

A commemorative medal of the Rákóczi Institute may be awarded to a researcher, lecturer or staff member of the institute who has had at least ten years’ employment with the institution. In 2021, the commemorative medal was awarded to Zsuzsanna Nagy, the planning economist of the Rákóczi Institute, and Géza Szabó, the former chairman of the board of trustees of the Foundation for the Transcarpathian Hungarian Institute.

The title of an outstanding employee of the Rákóczi Institue can be awarded to those active lecturers, researchers and employees who provide outstanding performance in their work. In 2021, Andrea Belovics, the accountant of the Institute, and Zsuzsanna Buda, the head of the Study and Career Tracking Department, received the award.

In her opening speech, Ildikó Orosz, the President of the Transcarpathian Hungarian Institute thanked the honourees for their work for the institute. The President greeted the undergraduate and graduate students separately and encouraged them to acquire in-depth knowledge. Finally, Gyula László Erdélyi, a Hungarian Benedictine monk wished perseverance for the first- and upper-year students and teachers: “A smart person learns from the examples and failures of other people, and carries on with the good things and experience inherited from their ancestors. It is a social obligation of all generations.”

Following the speeches, representatives of the historic churches asked for God’s blessing for all students, teachers, staff, and everyone present at the celebration.

The ceremony ended with the chanting of the Hungarian national song written by Mihály Vörösmarty.