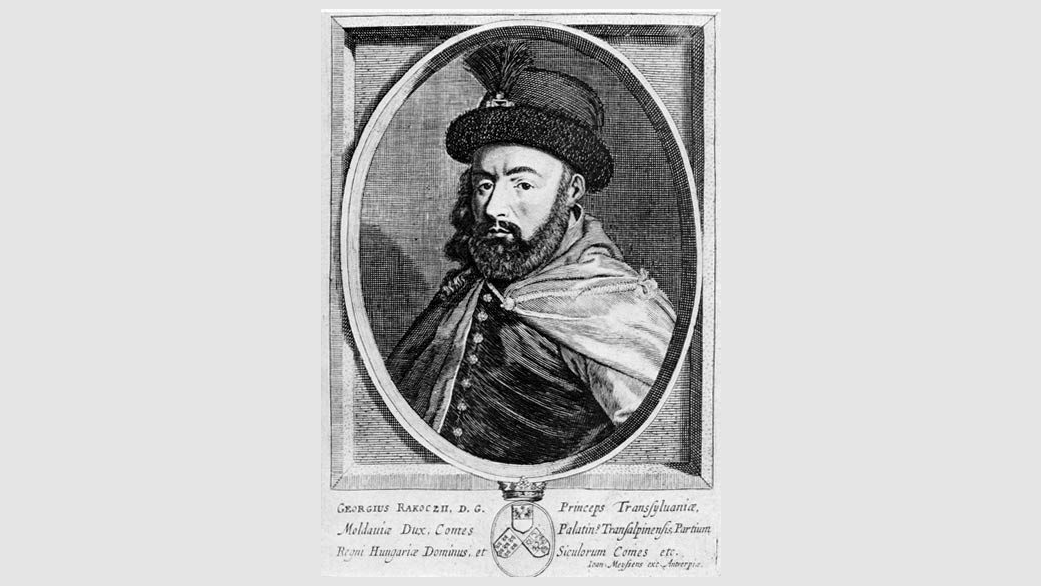 Among the Transylvanian princes George Rákóczi II (1621-1660) can be called a warrior because of his fight with the Turks and his unsuccessful campaign in Poland. He was prepared for reign from his childhood. His father educated him to read the Bible and go to church. As captain of Várad, he married Zsófia Báthori, the last of the Báthori family, in 1643. The Catholic wife became reformed, and only after her husband’s death did she return to her original religion. He was elected to be prince in 1642, but he was only inaugurated in 1648. As a prince of Transylvania, he paid the tax exactly to the Turkish, which is why the Moldavian and Wallachian voivodes were subordinated to him.

The main element of his policy was the acquisition of the Polish throne, which his father had already considered feasible, and, of course, the liberation from the Turks. The prince also followed international events to realize his political stance. At the time of the Swedish invasion of Poland, he is forming an alliance with the Swedes to obtain the Polish royal crown. Furthermore, in 1651 in Transylvania he negotiated with Bohdan Khmelnytsky, the Cossack Hetman who supported him in return for his fighting against the Poles, but they make an alliance only much later, on 7 September 1656. After that, on December 6, Rákóczi also signed the alliance letter of King Charles X of Sweden, which allowed him to form a strong anti-Polish coalition.

Rákóczi considered the international relations favourable for a campaign in Poland, but his mother and some advisers warned against his going abroad. He mobilized his followers and designated the town of Visk in Maramures County as a gathering place, and on January 14, 1657 he ordered his troops there, again negotiating with the delegates of the aforementioned Allied States. He set up a luxurious tent in the crown town, where he received, among others, the Russian envoy Alexei Mikhailovich, who brought a valuable gift to Rákóczi, with the aim of diverting him from the Polish campaign. However, despite the offer, the prince trusted the support of the Swedish king. On January 17, he organized a parliament in Visk, where the aristocratic orders adopted four articles, mainly laying down the conditions for taxation. Rákóczi appointed his governors, Ferenc Rhédey, Ákos Barcsay and István Serédy. Ferenc Rhédey was the next prince of Transylvania, his family ties were for a long time bound to Maramures, he died on May 13, 1667 in Huszt.

On January 18, 1657, the troops counting about 30000 soldiers who gathered in Visk headed towards Poland through Kövesliget. They travelled through Ökörmező to Hidegpatak, Iszka, and Priszlop, and then crossed the winter pass with great effort. Moving on the rocky mountains with military equipment proved to be a great challenge and it turned out to be a great military accomplishment. The prince paid a distinguished mercenary to his soldiers, cleaning the snowy roads himself. Part of the army, following Rákóczi’s order, headed in a different direction to the Beskids. The army arrived in Skole on January 30, from where the prince sent János Kemény at the head of a team to his Polish supporters. Then they occupied Krakow and then Warsaw. During his advancement, Rákóczi was joined by 20,000 Cossacks, who increased significantly the number of troops, which initially consisted of about 18,000 horsemen, 5,000 Transylvanian infantrymen and 6,000 Vlachs. After the seeming victory, Rákóczi found himself in a changed political-military environment, and as a result, his strengthening in Poland could not succeed. Hearing about the Danish invasion, the Swedish king retreated with his army from Poland, and the Turkish Porta ordered the Tatars to expel the Transylvanian troops from Poland. Rákóczi was particularly sensitive to the fact that his old relatives and friends had turned against him. When the army turned back, the Cossacks made themselves and their enormous prey see home with the Transylvanian troops, and as soon as they were close to their country, they simply left the prince. The Prince eventually fled home with only three hundred of his men, after making a humiliating peace with the Poles.

He carried out this campaign as an independent prince, without the approval of the Turks, and did not accept vassalage. He paid heavily for his deed, and after the defeat, Rákóczi’s soldiers were captured by the Tatar, many of them died, and the rest could only be released after paying a high ransom. János Kemény, the leader of the army, was also held in Tatar captivity.

After this, another tragedy started. Despite his promise to the prince, Marshal Lubomirsky of Poland launched a vengeance campaign against the Rákóczi estates. On June 15, 1657, the Marshal’s soldiers crossed the Beskids and robbed the entire northeast of Hungary from Szepes to Maramures. Munkács, Beregszász, and Visk were burnt. People who fled to the Catholic Church in Beregszász were executed and the church was burnt down. As a sign of revenge, they wrote on the temple wall: “Vicem pro vice reddo, amice, tibi!” (Meaning: “I’ll give you the loan back, good neighbour.”) At that time, the village of Kismuzsaly was destroyed, and its ruin church is still a memento. Historical academic literature records the damage.

After Rákóczi’s failure, Transylvania was threatened by a Turkish-Tatar robber attack. The Parliament elected Ferenc Rhédey as prince in October 1657, but Rákóczi, with the help of the Szeklers and the Hajdú, regained power in early 1658. He negotiated with the Habsburgs, but Emperor Lipot assured the Turks that he would not intervene in their attack. As a result, the Tatars destroyed Transylvania. Then Ákos Barcsay was elected prince, even if he lost a large sum of indemnity and fortifications, but saved the country. Soon, however, with the help of the Szeklers, Rákóczi set off against Barcsay in the north-eastern plain. The prince, who was repeatedly made to resign and then was re-elected, was noted to be an excellent soldier, always fighting in the front rows. He was wounded in the battle of Szászfenes (23 May, 1660) against the Turks and died shortly afterwards. With his death, Turkey restricted Transylvania, which had a certain degree of political and economic freedom. Later, the Turks forced Várad to surrender, and after the fall of the city copies of the Várad Bible that were being printed were still transported away safely.

Ferenc, the son of George Rákóczi II, was elected prince in 1652, but after his death his wife and son had to leave Transylvania.

After George Rákóczi II, few documents remained in the Transcarpathian State Archives. We only have five regulations issued by him. All the more, Zsófia Báthori’s writings have been preserved, with over 30 self-signed letters in our archives. He gave orders about private, property, and commercial issues, which can be found in the records of the surrounding counties, city chief judges and the Bishopric of Munkács. Although George Rákóczi spent a long time in Munkács, his wife was in charge of the affairs of the Munkács Domination. This time we report on the documents signed by the prince

On April 6, 1650 in Gyulafehérvár George Rákóczi II issued a noble letter to Mihály Tóth of Máramarossziget. A copy of this document has been preserved for us, not the original. The Transylvanian princes had many similar cases. In a letter dated December 9, 1650, that can be found in Baron Perényi’s family file, Rákóczi took sides in a court case: he decided to execute a court decision against István Lencsek in favour of István Kőrösi. This is an original document with a wax seal. Furthermore, in 1653 he wrote from Földvár that the litigation against Anna Géres be postponed. In addition, two letters of his remained in the collection of the five crown towns of Maramures about his decision of December 13, 1655, when he presented his position on the delimitation of borders of the villages of Técső and Szaplonca and Remete. The original wax seal is clearly visible on the document and the other copy is also preserved.

Human Geographical Processes in East Central Europe: Problems, Tendencies and Trends Venice Commission’s Expert Opinion of the 2019 Law on Supporting the Functioning of the Ukrainian Language as the State Language
News