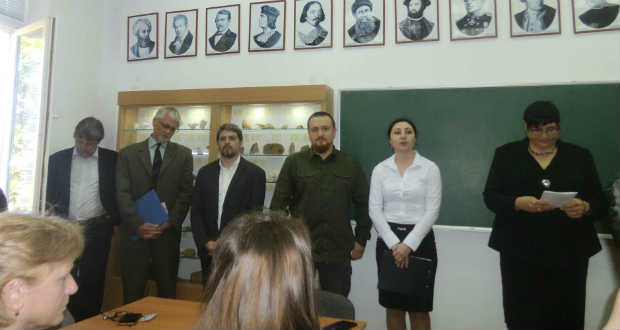 The opening ceremony of Mineral show Exhibition set up in memory of former Vice Rector JenőBarkáts was held at the Ferenc Rákóczi II Transcarpathian Hungarian Institute on May 20th.

Jenő Barkáts worked at the Institute since 1999. During his life he established YoungTranscarpathian Hungarian Researchers Conference, Academic Student Conference,Transcarpathian Hungarian Special Course named Ilona Zrínyi. He worked as a professor of theInstitute’s Department of Mathematics and Informatics. The outstanding researcher, lecturer passed away in February 2016.

In memory of his father Norbert Barkáts donated a valuable and rare mineral collection to the Institute for the period of over 10 years in order to broaden students’ knowledge.

The opening ceremony was honored by the presence of the widow of the deceased Alice Barkáts and their son Norbert Barkáts.

The guests were greeted by Rector dr. Ildikó Orosz. She pointed out that the late Vice Rector was a great friend and colleague, having done his best for his family and for the support of the Hungarian Institute.

Tamás Weiszburg, General Vice President of the National Academic Student Council, a friend and colleague of dr. JenőBarkáts, stressed that the minerals are of a very high value, as they are found in nature: these materials forming the basis of life have interwoven our everyday lives. The minerals come from all over the world, one tenth of which are from the Carpathian Basin. The processing and cataloging of the collection was carried out by dr. Tamás Weiszburg, dr. Gábor Papp, dr. István Gatter, dr. Sándor Gönczy, and Norbert Barkáts.