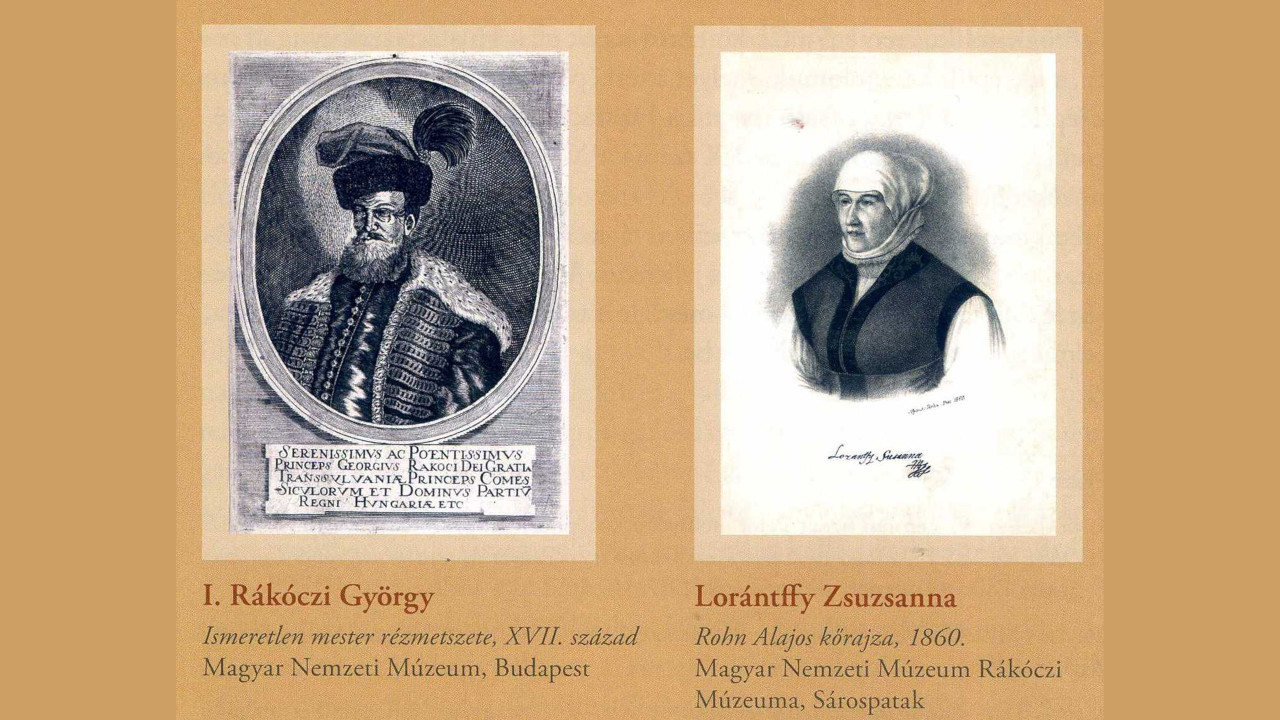 György Rákóczi I of Felsővadász, second prince in the family, was born on 8 June, 1593 in Szerencs. His father was Sigismund Rákóczi, the first wealth creator of the Rákóczi family (see our previous article), and his mother was Anna Gerendi. Together with numerous other youngsters, he was also brought up in the court of István Bocskai in Kosice. Here he got acquainted with Gábor Báthory and Gábor Bethlen. He became sheriff of Borsod County in 1615, then captain of Ónod Castle. He married Zsuzsanna Lorántffy on 18 April, 1616. He received the estate of Sárospatak with his wife, which later became the most profitable estate besides Munkács/Mukachevo.

He joined Gábor Bethlen in 1619, with whom he started attack against the Habsburg king, Ferdinand II.  This year he was elected Captain of Upper-Hungary, his task was to secure the hinterland in the campaigns of Gábor Bethlen. He fought against György Homonnai Drugeth unsuccessfully. Bethlen returned from Vienna to Hungary on 23 November, 1619, and made Rákóczi his princely counsellor. Nevertheless, Rákóczi remained faithful to Gábor Bethlen, who died in 1629. Due to the inadequacy of the heiress, Katalin Brandenburg, a power crisis ensued, and Rákóczi became a potent ruling candidate against Gábor Bethlen’s younger brother, István. Being supported by the Hajdú military and the Pasha of Szolnok, he set off towards Transylvania. In the end, there was no armed clash between the two rivals, as the Porta, who had no interest in the case, sent two Ahdnames and the new prince could be chosen by Katalin Brandenburg. Guided by the hatred towards the widow István Bethlen, she read a document issued for Rákóczi on 26 November, 1630 in Segesvár, and on December 24, the lucky winner swore his princely oath.

As a result of Rákóczi’s actions, he took back the private treasury estates and broke the power of the owners of large estates. He sometimes confiscated their estates, and with some of these he increased his family wealth, through which he established the power of Transylvania.

The eighteen years of reign of György Rákóczi I meant peaceful development for Transylvania. The Habsburg ruler was then occupied with the Thirty Years’ War, while the other great power, the Turkish Porta, was occupied with the Janissary riots. He could connect military victories to his constructive politics. He strengthened his power by the victory at Nagyszalonta against the pasha of Buda. The famous Protestant prince was soon contacted by Swedish and French diplomats who persuaded him to go into war against the Habsburgs. However, the aristocracy that became Catholic since the age of Gábor Bethlen, withdrew its support, and so did the Porta, therefore he ended his campaign without success.

Rákóczi signed a favourable separate peace treaty in Linz in 1645 with Ferdinand III, in which he regained seven counties in Upper Hungary for Transylvania, as well as ensured Protestant religion for the serfs of the royal region. After all, György Rákóczi was not only a patron of the Reformed Church, but also a book collector. His wife, Zsuzsanna Lorántffy, also lived a God-pleasing life according to the Bible. He also left his deep religiosity as a heritage to his descendants, and they were considered to be regular Bible readers.

The prince was also represented in the Westphalian negotiations beginning in 1645, and thanks to his diplomats, Transylvania was included in the 1648 peace treaty ending the Thirty Years’ War. Thanks to Rákóczi’s policy, Transylvania was prepared to expand its territory into the Central European region – thus breaking the Porta’s control. He filed several lawsuits to increase his land tenure. While other princes enriched the country, Rákóczi enlarged his family wealth. In the long run, however, he made the life of his subjects easier with his riches: as his family estates grew, so did he gradually liberate the trade of his subjects. First, he authorized the retail sale of honey and wax, then that of other export articles.

When he was elected, he had ten large estate complexes in his hands, in whole or in part, at the time of his death he ruled thirty-two. Around 1648 a total of 27,000 serf households in Hungary and in Transylvania worked on the estates of Rákóczi: well over one hundred thousand souls lived in his villages and 56 market towns. Further 64 farms, and also 12 wine farms produced for Rákóczi. A large part of this huge property was spread in royal Hungary, but a significant part was also found in Transylvania. Twenty-one market towns, among them the seat of the prince, Gyulafehérvár itself, and twelve thousands of the serfs’ households were located in the 15 Rákóczi estates in Transylvania.

Starting from 1639, Rákóczi paid great attention to the fortification of Munkács castle. It was noted that the prince had a direct say in the course of work. In the 1640s he had Italian masters to work for him. In 1649 two bastions with casemates inside were built in the middle part of the castle surrounding the gate. However, after the Rákóczi War of Independence, the built sections were also changed.

Nineteen original letters of György Rákóczi and six copies of his letters are kept in the Transcarpathian State Archives. His decrees are kept, among other things, in the archives of the chief judge of the city of Mukachevo. As prince of Transylvania, his life was connected to Mukachevo in many ways. In 1633, the Habsburg monarch Ferdinand II conceded the city together with the villages belonging to it to Rákóczi for 200 thousand forints. Since then he became the landlord of 140 villages around Mukachevo and 33 settlements of the Chynadiievo/Beregszentmiklós manor. He received the French ambassadors there on April 23, 1645, with whom he discussed the campaign against the Habsburgs.

He built the lower fortifications of Mukachevo castle with two French engineers and built defensive walls with firing holes. We keep four decrees of his about the castle and the city of Mukachevo in Transcarpathia. His writings show the prince’s decisive role in personal and litigation matters. In his instructions, he regulated the use of meadows around the castle for people of various ranks. He patronized the owners of the newly purchased houses, and then prohibited the nobles from buying farmhouses. He made decisions in lengthy inheritance lawsuits and about paying penalties. During the campaign against Vienna in 1644 he had intensive correspondence with the county of Ung, demanding financial surrender from the county. Ung County also sent troops, carts, food and forage to Rákóczi despite difficulties. It can be stated that the north-eastern counties contributed to the cost of the campaign, though not in the desired amount. He gave specific instructions to the troops stationed in the counties of Szabolcs, Szatmár, Bereg, Ugocsa and Ung. The prince ordered 100 horsemen under Szendrő, but later correspondence shows that this number could not be provided. He had problems with runaway, unruly soldiers. The prince had an army of 15,000, which required great efforts to feed and supply. In his letters to the county of Ung he resolutely defended the interests of the Reformed, he returned the goods seized from Catholics, and last but not least he defended the rights of his loyal subjects.

In his contract with Ferdinand II, he secured recognition for his Principality of Transylvania, while committing himself to dismantling the Hajdú soldiers. His relationship with the Greek Catholic Church also formed in good faith, and he supported the appointment of Bazil Tarasovits as bishop of the Mukachevo-Maramaros episcopate in 1634, and he expected it from his subordinate officers as well. In 1648 the property acquiring prince granted privileges to the inhabitants of Chynadiievo/Beregszentmiklós. In two of his letters kept in the Bereg County Collection, he orders about the property of his loyal subjects, and then protects the potters of Mukachevo, determining who should pay taxes and who should work for money.

At the end of his life Rákóczi concentrated on acquiring the Polish throne. The Prince also gained Cossack support for his plan, but it failed because of his death in 1648. The assessment of Prince György Rákóczi’s domestic politics is still controversial, mainly because of his property confiscation activity. Only later did this have a positive effect, as it led to the centralization of Transylvania and the strengthening of the princely power. Peaceful development through stability made it possible to continue the Bethlen Golden Age, which led to the support of Reformed education and the boom in book printing. During his reign he renovated and expanded the printing press workshop in Gyulafehérvár. In addition to the Hebrew and Greek fonts, he also printed with Cyrillic fonts, keeping in mind the needs of the Romanian population. He created a rich collection of Bibles in his library in Gyulafehérvár.

The End of a Long Year. The Treaty of Saint-Germain is One Hundred Years Old Orosz Ildikó’s Inaugural at the Opening Ceremony of the Academic Year at Rákóczi-Institute Nagydobrony (Velyka Dobron) Vocational Training Centre
News