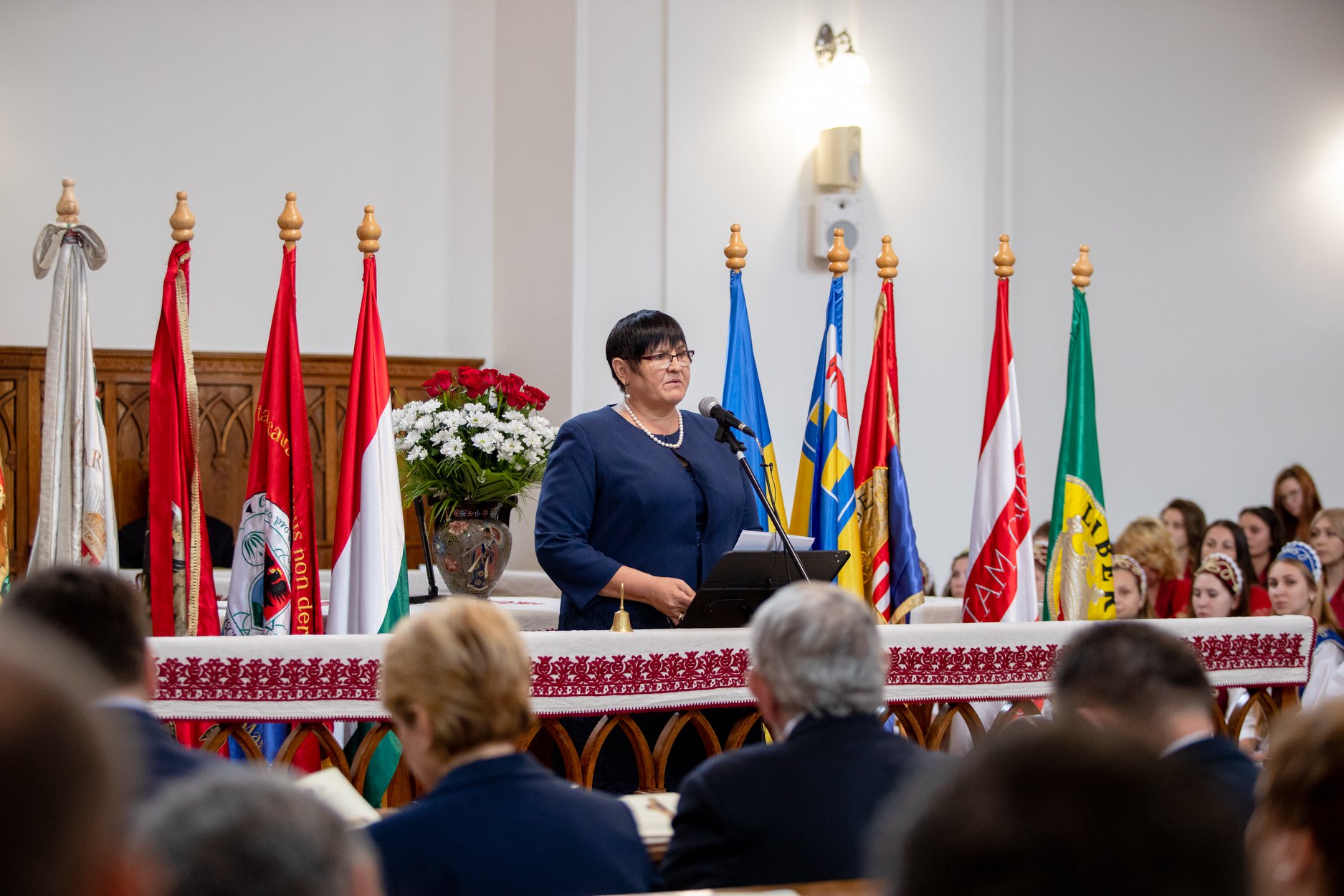 Today, the academic year 2017-2018 ends for 1051 students at various training levels of the Ferenc Rakoczi II. Transcarpathian Hungarian Institute. In 2018, 102 graduates receive their BA/BSC or Master’s degree. 72 students are going to receive the “Young Professional” diploma at a later date. On 2 March, the Tourism Services department had its first graduation, where twenty students received their degrees. At BA/BSC level, we have re-accredited our trainings in history, geography, mathematics and teaching.
The vocational training institute has completed this academic year with 326 students, 48 teachers and with a new momentum. For the first time, training in applied mathematics was accredited.
During this academic year, 119 full-time, 17 part-time, teachers and 21 lecturers taught our students. Of them with a 15 DSc, 59 with a PhD degree, 13 professors and 14 associate professors. Unfortunately, today they cannot be with us, but Professor Siusko, his wife Larissa Siusko, and Marianna Brenzovich are watching us from the above. Let’s remember those who left this world with a minute of silence.

We also want to report on our success.

Our institution was awarded by the American Hungarian Coalition.
Dr. Róbert Bacsó, Head of Accounting and Auditing Department, successfully obtained his doctoral degree at the Semen Kuznets National Economic University in Kharkiv. Erzsébet Kohut and Anita Márku have naturalized her PhD degrees obtained abroad. Unfortunately, the naturalization of two of our colleagues was rejected without justification.
Júlia Petecsuk from the Mathematics Department, has obtained a PhD degree in mathematics and physics. Vilmos Gazdag defended his PhD at the Slavic Linguistics Program of ELTE. Judit Pavlovich defended her CSc dissertation in Kiev at the Volodymyr Dalyja National University in general pedagogy and pedagogy story.
Dr. Zoltán Varga, Professor of Biology and Chemistry received the Széchenyi Prize. Dr. Béla Nagy, associate professor of Biology and Chemistry received the Apáczai Csere János award. Erzsébet Molnár D., a teacher at the Department of History, a member of the Tivadar Lehoczki Research Center was awarded the Hungarian Golden Cross of Merit. The Hungarian Academic Council of Transcarpathia has awarded István Kolozsvári, the leader of the István Fodor Research Center, for his achievements in his research work. The SZIE has awarded Béla Pái a diploma of honours for his work at the department of horticultural engineering. Anita Márku and Enikő Tóth received a scholarship of the New National Excellence Program, and Kornélia Hires-László received the Collegium Talentum scholarship in this academic year.
The XIV Conference for Young Hungarian Researchers took place recently. 30 young researchers presented their findings at the conference. The presentations took place in 4 sections with 20 opponents who arrived from 9 foreign educational institutions. In May, the XII Transcarpathian Hungarian Student Conference took place. We received 42 applications, 39 of which were accepted. The papers were assessed by 50 opponents. The presentations took place in 7 sections with 28 experts. Some of the presenters of this conference are authorized to participate at the XXXIV State Student Conference in Hungary.
Our students were successful at the student conferences.
Eszter Balog, a student of the mathematics department won second place at the Sánra Márton student conference. Miklós Sztároszta won second place at the Scientia Denique conference in Uzhgorod. Gábort Szanyi, a student of the Hungarian department won second place of the philology section at the XII Student Conference. A poem by Tamás Nagy was published in the periodical of the Hungarian Writers’ association. Veronika Puskás and Alexandra Nagy presented their research at the international scientific conference that took place during the Rákóczi days. Katalin Szabó, a student specializing in social pedagogy won first place in the final of an oratory contest at the ELTE. At a specialized contest, Alex Livdánsz from the department of tourism was awarded by the professional jury. Our geography students represented the institute at a state contest in Kyiv, Lívia Nagy and Edina Tar received prizes at the XVI State Ecology Conference for College Students.

Every year, Andrea Bocskor, a former student of out institute and now a member of the European Parliament rewards the best historian student and the student with the best average grade with a trip to Brussels. This year our historian graduate Tamás Baranyi and Vivien Gréta Gál from the English department received a certificate of merit and the trip to Brussels.
In the Makovecz student program 47 students participated in the exchange program for 1-3 months. Two foreign students arrived to the Institute for a full semester training. In the Makovecz Teachers’ program 6 foreign college teachers arrive here as guest professors. Due to this program 200 students of 7 departments participated in a 1-day practice trip or a 4-5-day training trip at the partner Institutions.
In terms of the Erasmus+ mobility program our students spent a semester in three different colleges. This year we did not have incoming mobility in this program. The mobility program for teachers and administrative employees provided an opportunity for 8 teachers and 1 administrative employee for a 5 or 10-day trip. Also, 4 teachers and administrative employees arrived to out institute for 5-day mobility.
The adult training centre of our institute arranged its traditional language courses in English, German, Russian and Hungarian. 4317 people applied for these courses, including the employees of Hungarian Consulates in Berehove and Uzhgorod, who applied to study Ukrainian. The language trainings took place in 45 settlements of 12 districts, 120 hours for each group. In the second semester 3997 applications were received from 41 settlements in 11 districts; the trainings began in 209 groups with 87 teachers. For those, who completed level A2 successfully, we provided an opportunity to keep studying to reach level B1. 1305 students chose to go on, so the training continued in 17 locations of 15 settlements in 9 districts. Thus, in this academic year 9471 people applied for the language courses. In the ECL language assessment centre 25 students passed their language exams in Russian, English, Hungarian and German on elementary, intermediate and proficient levels.
Our departments and research groups conducted research reflecting local problems:
The Tivadar Lehoczky research centre continued to research, digitalize and publish the archive materials from World War I, as well as the research on the “Cemeteries as the “live” witnesses of the past”, “The victims of communism between1944 and 1953” and “Minority monitoring”.
As a result of the work of the Fodor István research centre there are now 495 species and varieties in the Nagybereg flora collection, our Scientific Herbarium has stored and managed 3500 herbarium sheets of 450 species, the 1902 categorized items of the zoological collection are under preparation and taxonomic processing.
Research of the Department of Geosciences and Tourism: Demographic Relations of Transcarpathia; Ethnic geography and political geography of Ukraine; Environmental problems in the settlements of our region; Vulcan complexes in Transcarpathia; The peculiarities of tourism in Transcarpathia.
The Department of Accounting and Auditing participated in the research of the Hétfa Research Institute and in the joint research of the Department of Finances of Kharkiv National Economic University.
The results of our research have been published by our colleagues in a number of publications. During the academic year 202 publications were published as a result of their work. 12 of them appeared in Web of Science, Scopus and other high impact periodicals, also as independent monographs, book chapters, methodological publications, as well as in domestic and foreign scientific journals.
Publications in the scientific journals of our institute:
– ACTA ACADEMIAE BEREGSASIENSIS: papers by 24 Transcarpathian and foreign researchers on 248 pages.
– LIMES: papers by 29 Transcarpathian and foreign researchers on 174 pages.
We also arranged a number of conferences. In terms of the Rákóczi Days our Philology Department in cooperation with the Department of Multicultural Education and Translation of the Faculty of History and International Relations of Uzhgorod National University a conference on Multiculturalism and Diversity in the 21st century took place on March 27-28, 2018. 122 participants form 16 countries (the USA, the United Kingdom, the Czech Republic, Indonesia, Iran, Japan, Jordan, Canada, Poland, Hungary, Germany, Russia, Romania, Syria, Slovakia, Ukraine) presented at the conference
Our PEPSY (pedagogy and psychology) department participated in the organization of the III. Networking Conference of the Carpathian-Basin Relief Service, as well as the workshop “The night of spiritual renewal” of the Transcarpathian Mental Hygiene Society.
The department of History and Social Sciences in cooperation with the Lehoczki Tivadar Research Centre arranged a scientific conference for the 150th anniversary of the Austrian-Hungarian Compromise titled „Indivisibiliter ac Inseparabiliter – Indivisibly and Inseparably”.
The Vocational Training Institute has organized a vocational training conference in terms of the Year of Vocational Training.
During the past academic year, our staff members participated in 129 national and international conferences in Kyiv, Mikolajiv, Pereyaslav-Hmelnyickyj, Lviv, Dnipro, Drohobics, Uzhgorod, Mukachevo and other Ukrainian cities. A number of lectures were presented in Hungary, Romania, Finland, Holland, Belgium.

Call for Submission for Short Fashion Films A speech by Ildikó Orosz, Rector of the Ferenc Rákóczi II Transcarpathian Hungarian College of Higher Education on October 22, 2018 at the central celebration at the Terror House Museum in Budapest
Featured news