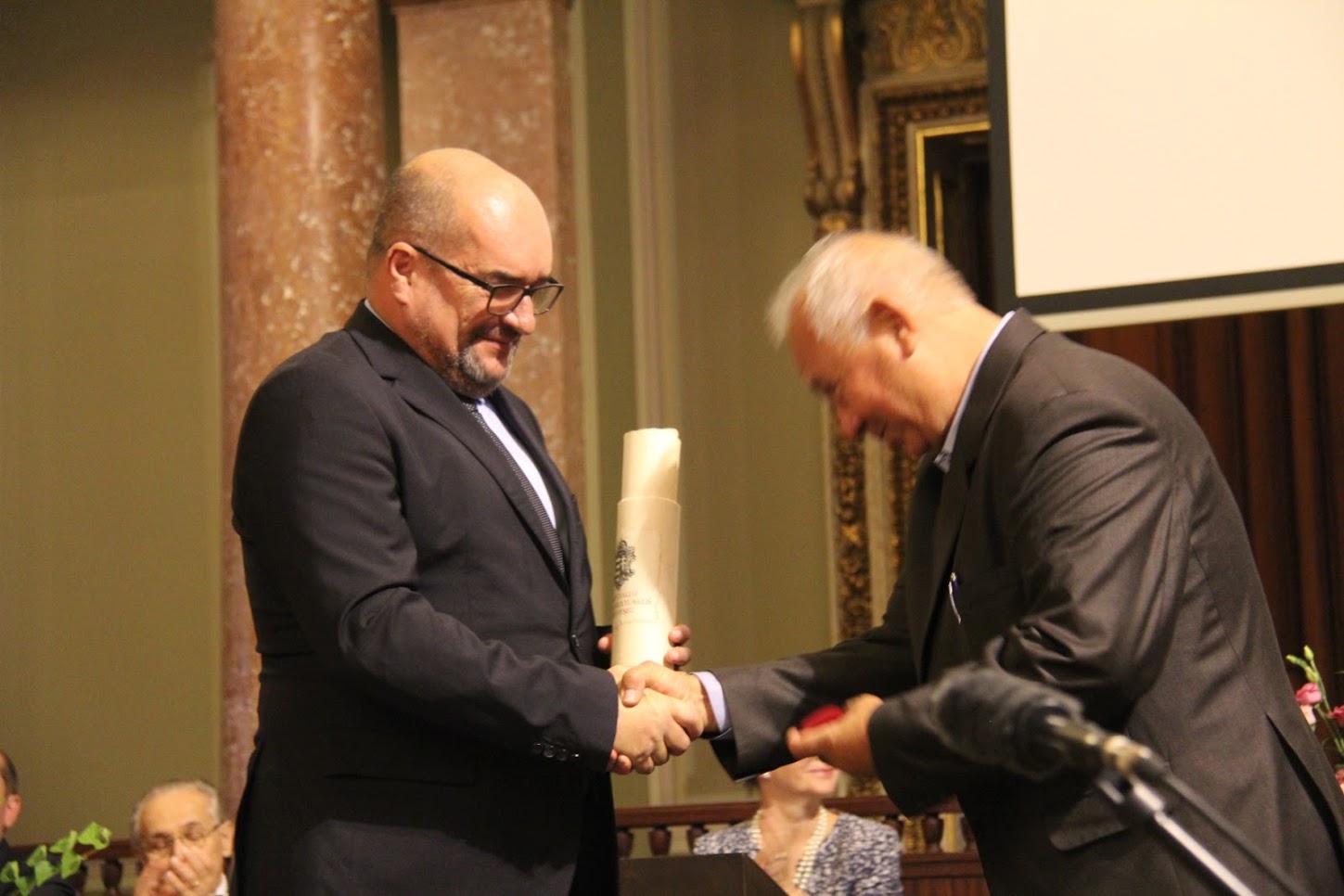 Dear Jury of Award, laureates, and the audience!

In spring 1989 even the westernmost parts of the Soviet Union could feel the spirit of freedom coming. The dictatorial regime was still upheld, its secret service and law enforcement were watching each and every commotion and demonstration. Despite all that, there were many who felt and recognized the moment had come for the Hungarian community to make the steps that could upbear our Hungarian ethnic group.

Right after Shevchenko Society was established in Kyiv to promote the Ukrainian language and culture, Uzhhorod University intelligentsia initiated the formation of its regional department. At the incentive of and under the leadership of Fodó Sándor a Hungarian initiative group was established and on 26 February 1989 in Uzhhorod, Transcarpathian Hungarian intelligentsia was convened in the regional trade union headquarters. The authorities did their best to prevent the Hungarian cultural community, formed from the bottom strata, from becoming what the Hungarians had always strived for. The establishment wanted the prospective organization to be formed within the Soviet-Hungarian Friendship Society, to be its integral part, or to function as a subsidiary organization of Shevchenko Society. However, the audience in the crowded clubroom set aside all initiatives of this kind and in an intense, heated debate established the Association of Hungarian Culture in Transcarpathia and its directorate, elected its first chairman – not one of the postgraduates supported by the authorities, but Fodó Sándor, well-known for his oppositional past.

After revealing its foundation there was a long background struggle for recognition and registration. However, this could not stop the community and by joint efforts they did manage to set up the Transcarpathian Hungarian community’s protecting net. Within a month or two basic organizations were formed and, as if they had always known what to do, the missing Hungarian-language kindergartens, schools started being established. In December, right after the outbreak of the Romanian revolution, donations were collected for our Transylvanian brothers. Women hid messages, encouraging words and their address into sugar, rice, salt and flour hoping that somebody would read and answer them.

As the autumn of the notable year was drawing near, Transcarpathian Hungarians – all as one, with one accord stood up for the vindication of the Hungarian men who were dragged away in autumn 1944 to Stalin’s labour camps. This demonstration, however, was organized and controlled by the Association of Hungarian Culture in Transcarpathia. The villagers made a list of the deported and reviewed the deceased ones. Next year in autumn monuments were set up from voluntary contributions to bury the innocent symbolically, thus seeing their souls home. Life was all hustle and bustle, everybody wanted to contribute, and the community brought to life the plans made during their almost seventy-year-long dream.

The founders’ major merit was the fact that they recognized the opportunity in the political situation and had no fear to do the proper steps. It was recognized that the community needed everything they lacked before: free press, Hungarian-language books, radio, TV, theatre, vocational training, university, gymnasium, kindergarten and for the villages to get back their dignity via their old Hungarian names.

And then came the first elections. There were candidates in each and every settlement, at all levels and the greater part of the candidates got credit from the voters. It is true that here one could see the difference between the Hungarians for each nation and community has Janus-faced individuals who change colours, opinion and what they stand up for depending on their interests. However, there were loyal and unwavering ones as well who were happy to do their duty without financial support, often at the expense of their family budget.

The second phase of transformation into an organization started when talented representatives of the younger generation with training in political science came on the scene and together with the founders placed further development of the organization on a professional level. There was one outstanding person in this process – Milován Sándor who participated in the 1956 events and younger followers joined him: Gulácsy Géza, Kovács Miklós and Brenzovics László act in favour of the organization to date. Owing to the consistent standing up for the community’s dreams, they gradually came true. The Transcarpathian Hungarians now had their own newspaper, the villages got back their Hungarian names, and Hungarian-language groups were opened in kindergartens. Numerous settlements with no institutional Hungarian-language education had primary schools with the Hungarian language of instruction opened as well as Hungarian-language classes were initiated sporadically. The communities were returned their churches and in the last moments before the collapse of the Soviet Union the Hungarian theatre was established with Brenzovics László as its first dramaturge. The community made plans to set up an educational network with instruction in the learners’ mother tongue. First of all, in accordance with the 1972 application, the plan was to set up a Hungarian faculty at Uzhhorod State University. However, the university secluded itself, thus guarding its monopoly. Therefore, at the joint managerial meeting of the Association of Hungarian Culture in Transcarpathia and the Transcarpathian Hungarian Pedagogical Association in November 1993, supported by late Reformed Church bishop Gulácsy Lajos the decision was made to establish a foundation-based higher educational establishment. The challenge was immense for quoting János Bolyai “one had to create a different new world out of nothing”. Then in 1994 the Association of Hungarian Culture in Transcarpathia, the Transcarpathian Hungarian Pedagogical Association, the Reformed Church, and the Berehove Town Council registered the Charitable Foundation established for the Transcarpathian Hungarian Teacher-Training Institute. In spring 1994 the Charitable Foundation initiated – temporarily without success – the registration of the Institute. Due to the unwavering political support of the association and Brenzovics László’s persevering work in 1996 the institute obtained the licence authorizing it to conduct educational activity. Perhaps the organization’s greatest accomplishment is that the institution has already been functioning for 25 years. In fair weather and in foul, at Kyiv and Budapest negotiations and political battles, the present head of the Association of Hungarian Culture in Transcarpathia, Brenzovics László guaranteed stability and continuity.

An unpublished interview – Ildiko Orosz answers the questions of the Hungarian web portal Azonnali.hu The Association of Hungarian Culture in Transcarpathia and Vidnyánszky Attila Won a Prestigious Award
Featured news