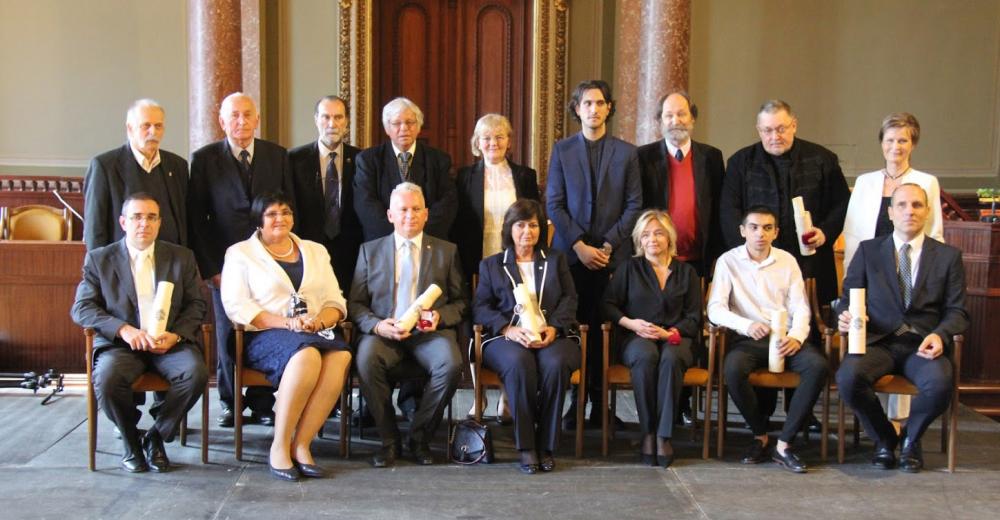 Last Saturday in Budapest, for the 96th time in its history, the Hungarian Heritage Award was given to seven outstanding personalities and institutions for their activity. Laureates include the Association of Hungarian Culture in Transcarpathia and Vidnyánszky Attila.

It is well-known that the Hungarian Heritage Award is given quarterly to those Hungarian personalities, groups and institutions whose activity contributed to the intellectual development of the Hungarian culture, science, economy, sport, that is the Hungarian society.

Vidnyánszky Attila, managing director of the National Theatre was awarded for his outstanding theatrical activity. Balog Zoltán, a Ministerial Commissioner and Reformed Church pastor described Vidnyánszky Attila’s theatrical art as follows: “To be a Hungarian, a Hungarian artist is less of a state, it is rather a vocation. […] Since Vidnyánszky Attila’s heart and the root of his creative vision are in Transcarpathia, in Berehove.” He characterized the artist himself as follows, “He serves and governs the nation’s universal theatre. Nevertheless, Vidnyánszky Attila still manages to remain a local patriot. He reveals Transcarpathian Hungarians’ current tragic situation. At the time of outlawry causing tragedies of destiny he undertakes the role of continuous local and national “beacon” addressing the public. He fights for the Hungarians’ linguistic and cultural freedom: as a public figure, creator, patriot, and Transcarpathian Hungarian.”

The Hungarian Heritage Award was also given to Snétberger Ferenc for his guitar art and musical talent management activity, Veres Pálné Gymnasium for its 150 year-old efficient work in education and the first place in female education, Féja Géza for his authorship and sociographic activity (the award was taken over by his grandson Féja András), Kerepesi Cemetery, as well as posthumously to baron Eötvös Loránd, the world-famous physicist and geophysicist, whose exemplary oeuvre on Hungarian science and education was summarized by dr. Gazda István, researcher of history of science. The award was taken over by the rector of Eötvös Loránd University, academician, dr. Borhy László.

The laureates received high-level acknowledgement on 21 September since the Hungarian Heritage Award is also called the Hungarians’ intellectual legion of honour.

Laudation of the Association of Hungarian Culture in Transcarpathia – Laureate of the Hungarian Heritage Award The End of a Long Year. The Treaty of Saint-Germain is One Hundred Years Old
News