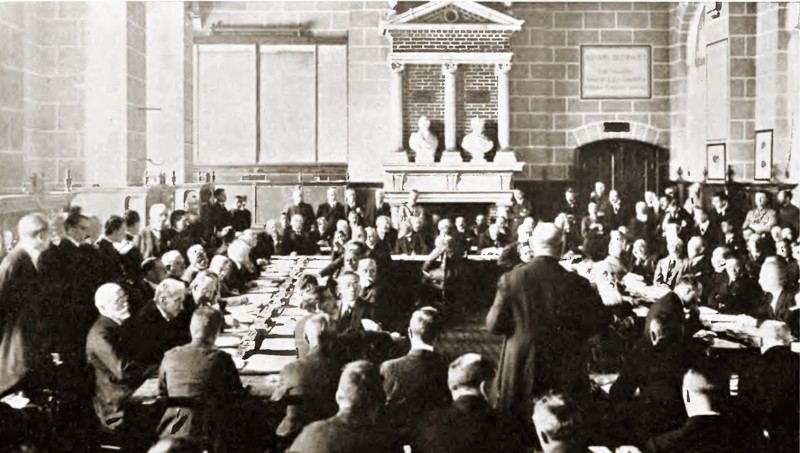 The End of a Long Year. The Treaty of Saint-Germain is One Hundred Years Old

The fact that Hungary lost a considerable part of its territory after World War I (hereinafter – WWI) is related in public consciousness to the Treaty of Trianon. Indeed, in 1918-1919 Hungary got out of the chaotic whirlpool of events and accepted the verdict of Paris arbitrators in the peace treaty. However, even before 1920 the torn-away territories passed into the control of neighbouring countries, thus forming Hungarian minority communities.

On 10 September it will be one hundred years since the Austrian peace delegation signed the second peace treaty in an ancient royal castle in Saint-Germain-en-Laye, a precinct of Paris with the Allies and their associates, the winners of WWI. Articles 10-13 in chapter II of the peace treaty can raise the interest of a Transcarpathian reader. They specify: the territory of the Ruthenians living to the south of the Carpathians will come under the control of the newly formed Republic of Czechoslovakia as an autonomous unit. The peace treaty did not specify the name of the autonomous territory that later became known as Podkarpatszka Rusz (Підкарпатська Русь, Podkarpatská Rus) – an administrative unit of the Republic of Czechoslovakia, though without autonomous rights until 1938. This region to the south of the Carpathians, formerly consisting of north-eastern Hungarian counties, was later called Ruszinszkó, then Kárpátalja (Закарпаття, Transcarpathia) in the Hungarian vernacular and was inhabited not only by Rusyns, but also Hungarians, Jews and Germans.

Long before the peace treaty was signed in the city of Île-de-France, the greater part of Transcarpathian territory was occupied by Czechoslovakian troops. From the end of WWI to September 1919, the start of forming the new public administration, the territory’s history was rich in events.

In autumn 1918 WWI was over. The Austro-Hungarian Empire collapsed, the Aster Revolution ran its course, Archduke Joseph appointed Count Károlyi Mihály, head of the Hungarian National Council the Prime Minister. Even the north-eastern corner of Hungary reacted to these events. On 3 November in Beregszász (Берегове, Berehove), the centre of Bereg County, the people’s assembly held in the pouring rain proclaimed affiliation to the Hungarian National Council and established the local national council. Similar ceremonies were held in Munkács (Мукачево, Mukachevo) and Ungvár (Ужгород, Uzhhorod). The collapse of the Austro-Hungarian Empire brought about secession ambitions among nationalities, and the majority population of north-eastern counties – the Rusyns were no exception. Multiple representatives of their political movements considered the time had come to express their opinion on the affiliation of the territories inhabited by the Rusyns.

The first Rusyn National Council was established in Szepes County, Ólubló (Stará Ľubovňa) as well as the territory to the east of the Carpathians were adherents of the unfolding Ukrainian statehood. Similar pro-Ukrainian councils were formed in Kőrösmező (Ясиня, Yasinia), Szolyva (Свалява, Svalyava), and Huszt (Хуст, Khust).  The only pro-Czechoslovakian Rusyn council was organized in the centre of Sáros County, Eperjes (Prešov). Papp Antal, the Greek Catholic bishop initiated and formed the People’s Assembly of Hungarian Ruthenians in Ungvár (Ужгород, Uzhhorod) who expressed their wish to remain within the jurisdiction of Hungary.

This region’s prospects were influenced not only by the Rusyn population of the counties situated to the south of north-eastern Carpathians, but also by the Rusyn emigrants from the USA. In the summer of 1918, the American National Council of Uhro-Rusyns was formed. It commissioned Gregory Zhatkovich, a lawyer to formulate the Rusyns’ claims. Zhatkovich managed to contact the president of the USA Woodrow Wilson. The formulated claims included: the Rusyns’ complete independence, in case that was not possible, then accession of the territory to some neighbouring Slavonic country with autonomous legal status, or in case it remained part of Hungary, then it should obtain extensive autonomy. After the October meeting with the American president in Philadelphia Zhatkovich held negotiations with Tomaš Garrigue Masaryk, where the president-to-be of Czechoslovakia offered the Rusyn delegation accession to the prospective Czechoslovakian state, and in that case a full Rusyn autonomy.

Then the People’s Assembly of American Rusyns became a member of the Central European Democratic Association and signed the Declaration of Independent Central European Nations in Philadelphia. On 12 November 1918 a referendum was held in Scranton city among the American Rusyns on the accession of the following counties: Szepes, Sáros, Zemplén, Abaúj, Gömör, Borsod, Ung, Ugocsa, Bereg, and Máramaros (Maramureș). The majority of those participating in the “referendum” voted for accession to Czechoslovakia who had proclaimed its independence fifteen days before. Zhatkovich presented the Scranton result to Masaryk, president Wilson and Minister of Foreign Affairs of the USA Robert Lensing. The Czechoslovakian delegation used these results at Paris peace conference to access the region to Czechoslovakia.

Meanwhile, the government of the Hungarian People’s Republic had its own ideas on the prospects of the north-eastern counties. The Károlyi government entrusted Jászi Oszkár, a minister without portfolio, a well-known social scientist, an expert in ethnic issues to elaborate the Hungarian nationalities’ autonomy. The newly formed Hungarian government considered it of great significance to come to agreement with the nationalities as far as it wanted to base its pacifist foreign policy on winning the favour of the Entente. However, there was little chance to pursue plans for autonomy in a country exhausted by four years in war and being on the brink of collapse. The Romanians and the Slovaks were committed to secession, and the Jászi negotiations failed. At the turn of November and December 1918 they hoped to come to agreement at least with the Rusyns. After negotiations with Rusyn organizations of various views the X People’s Act was proclaimed on 21 December 1918 prescribing the establishment of Ruszka Krajna (Руська Країна, Ruska Kraina) autonomous region on the territory of Ung, Bereg, Ugocsa and Máramaros (Maramureș) counties inhabited by the Rusyns.  The practical implementation of the law was controlled by two people with different habits: Szabó Simon, a scientist, a ministerial civil servant, a minister of Ruszka Krajna (Руська Країна, Ruska Kraina) and an adventurous life extrovert Rahó (Рахів, Rakhiv) lawyer Stefán Ágoston as Munkács (Мукачево, Mukachevo) governor of Ruszka Krajna (Руська Країна, Ruska Kraina).

As soon as the experiment to establish a Rusyn autonomous territory started, Prague was certain that Transcarpathia would be theirs. The peace conference had not even opened yet, when Masaryk, the president of Czechoslovakia announced in his speech that the Rusyns would form an integral part of Czechoslovakia. In accordance with the line of demarcation determined in December, the Czechoslovakian troops under the control of the Entente occupied Ungvár (Ужгород, Uzhhorod) and its precincts on 12 January. In Máramaros (Maramureș) County the Romanian army was marching on. Verkhovyna was engulfed in chaos. The soldiers returning home from the war banished twenty-four notaries only in the Bereg County; arbitrary seizures of land, plunders and hold-ups happened on a daily basis. The population was struggling with casualties, then Spanish flu, and later on with typhoid. In Kőrösmező (Ясиня, Yasinia) the local Rusyns proclaimed the Hucul Republic keeping close contact with the western Ukrainian state in Galicia. Their expansion attempts were supported by Ukrainian military formations from Galicia. It is of high importance in this situation that their advance was stopped in Máramaros (Maramureș) not by the Hungarian police force, but by the Romanian army. An armoured train of the Ukrainian Galician Army reached Csap (Чоп, Chop) without any serious resistance; in Munkács (Мукачево, Mukachevo) they even had time to fly a Ukrainian flag. Under such conditions there was no chance to carry into effect the Rusyn autonomy.

On 21 March 1919 Károlyi Mihály’s experiment was over. The establishment of the Hungarian Council Republic caused the advance of the neighbouring countries’ army. In April 1919 the Romanian, then the Czechoslovakian military started to occupy Transcarpathia. The borderline between the two armies was between Munkács (Мукачево, Mukachevo) and Beregszász (Берегове, Berehove), thus bringing an end to the Hungarian control in the region. The local population tried to behave peacefully towards the invading soldiers and to adapt to the situation. One day in spring Kozma György – a would-be Commissioner, Kozma Miklós’s brother – was driving by car from Mukachevo that was under the Czechoslovakian control to Beregszász (Берегове, Berehove) that was occupied by the Romanians.  He described his trip as follows, “There was heavy traffic on the Munkács (Мукачево, Mukachevo)- Beregszász (Берегове, Berehove) state road and we met an unusually great number of wedding processions. War, revolution, and occupation combined do not change much in the essence of life.” The 1919 military occupation of Transcarpathia had but one known fatal conflict, when the Czechoslovakian legionaries killed Pós Alajos, a journalist in Ungvár (Ужгород, Uzhhorod) after an argument. During the war as well as in the political and economic chaos following it the exhausted population did not want to resist. A significant part of municipal civil servants stayed at their positions, performed their duties trying to adapt to the evolved situation. The Transcarpathian Hungarian community hoped that the Czechoslovakian control would be temporary, however in 1919 it showed signs of becoming permanent. It took time to realize that the new borders will really be set up. Tamás Mihály writes about this phenomenon in his novel under the title “The water flows between the two banks” : “The daze had already begun to let go, people started to look at the events with a cold eye, but no one believed that the status would remain constant: everyone was waiting for some redemptive miracle.”

In the summer of 1919 at the Paris peace conference, one year before signing the Treaty of Trianon, the final Czechoslovakian-Hungarian frontier was approved. Although the Czechoslovakian peace delegation referred in its reasoning to the results of the American Rusyns’ “referendum”, to the Rusyns’, Czechs’ and Slovak’s Slavonic fraternity, the biggest argument in the decision was strategic value, i.e. the establishment of Podkarpatszka Rusz (Підкарпатська Русь, Podkarpatská Rus) made it possible to build rail connection between Czechoslovakia and Romania. The Czechoslovakian military occupied the whole territory of Transcarpathia within a year or so that followed. In parallel with the military administration, public administration as well started being established right after signing the Treaty of Saint-Germain. The old residents of the new region were informed of what had happened in Paris from the posters posted up in the settlements. The Hungarian residents read the following text in 1919 in Bereg that was not a county any more, but a zhupa, “The borders with reference to Hungary have been determined so as to include the whole Bereg County, Ugocsa and part of Máramaros (Maramureș) into the Republic of Czechoslovakia. Nothing will be changed on these territories to the detriment of the Republic of Czechoslovakia under any circumstances.” It was true for about twenty years.

The Association of Hungarian Culture in Transcarpathia and Vidnyánszky Attila Won a Prestigious Award On the land of the Rákóczis – about the Rákóczis: György Rákóczi I – the Bible reader
News